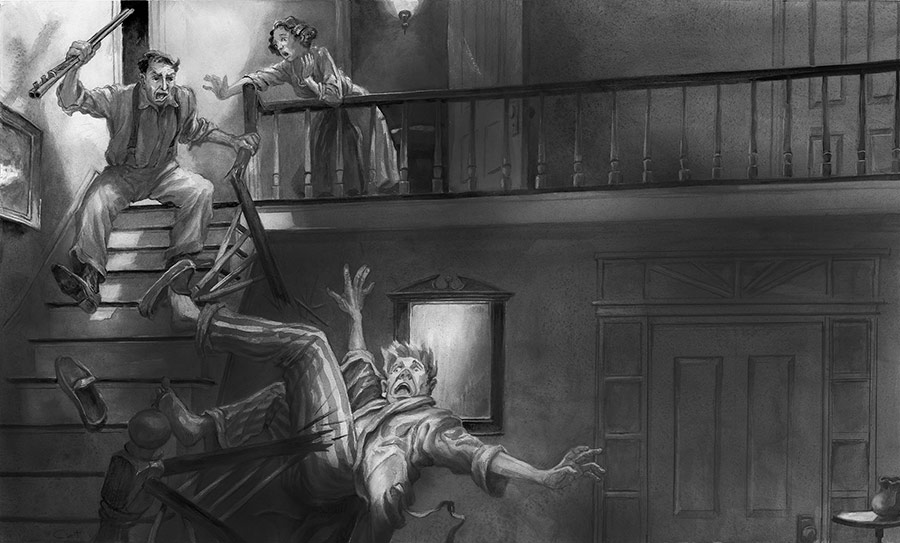 Last night I was talking with an artist friend about composition. This is one aspect of painting craft that will ever be a creative challenge and a joy.

So here I have a story of a man chasing a would be Don Juan from a liaison with his wife. She is at the top of the stairs, shocked and grasping to stop her angered husband. He barrels down the stairs and the sneaky suitor has fallen through the railing in his attempt to escape. So there is the narrative.

This narrative needs to show rushing, chaotic movement. That movement needs to start somewhere so it starts with the upstairs and the wife. Contrast is important, so to make the rush happen, it helps to have a contrasting stable space. This is provided by the right hand rectangles, locked in the corners and the stable triangular base around the woman. Her lower body is anchored in several triangles, which are in turn grounded on the one solid strong, almost horizontal of the landing. (The calm right hand side, of this two page spread, is also a quiet background for the intended float of title and first paragraph of text for the magazine story, A Country Weekend Affair.)

The motion starts with her reaching arm and drives down and around to the falling man’s outreached arm.

Okay, so that is the general movement and the various objects, limbs, shadows, slippers and railing help this movement.

The staccato pattern of the balusters and stair treads help this movement as well. One thing to note is how I cheated the stair rise height. The stairs from the husband’s supporting foot and above are compressed. Those below his supporting left foot are much bigger. This would be some poorly drawn stair perspective.  This was intentional. Those large stair drops below help his forward leg get pulled down the stairwell. And the compressed stairs above that left foot, help push up on his supporting leg. I think it works as planned. But in any case, I like to experiment.

There is another layer as well and that is the repeat of shapes that reinforces the curved spilling movement down the stairs.

Or another way of looking at it would be as progressive directional lines.

This is the overall picture motion. However, the three figures also have their individual thrusts. The woman, as we have already seen, is locked in some relatively stable, flat-based triangles, her only movement her initiating arm thrust.

The two men are anything but stable with their inverted triangles. Two downward thrusting triangles, divided by an upward thrust.

Then a lot of the rest is just repeating what we have started. There are repeated fan shapes throughout as more staccato movement with spindles, legs, arms. The painting had lots of arms and legs and spindles so why not make them work together in progressive spills. I think it was Balanchine who said that when creating new moves for a ballet, you should create no more than three new movement types and then repeat them in many different ways throughout.

Did I plan all this? Most of it. Once you organize the main events and shapes, and decide on a motif, a lot of the little stuff falls easily into place. If you have to put in a slipper, why not plan it in a good spot? If an arm has to reach, make it work as an arm, yes, but also make it fit the composition and the action…a shadow on the wall or streak of light…realism be damned, I need my story to work.

One final thing I built in was targets for the falling man’s reach. He is grabbing toward that unexplained block of light to his right hand and toward the light on the table toward his left. Both are completely out of reach, and I hope this helps with the feeling of the fall. Poor guy, I was really out to do him damage.

Did I succeed? Who knows? No time to sit and ponder. It was fun in the creation…now on to the next.