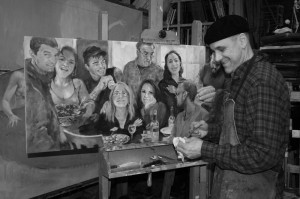 The ‘official’ bio is below.  Basically, I was born in Maine, lived away, moved back and now hanker for trips south.  The latest trip to Puerto Rico with Jen was a rich inspiration.  Several paintings on the easel already.

Painting, for me, is telling stories in pigment.  Narrative painting is dead? bull.  Picasso would groan or laugh or rant at the thought, and Matisse and Orozco, Vulliard, Larry Rivers, Hockney…

The problem with making bold, pronouncements, “Narrative art is dead!”, is that with so many artists out here working in so many visual languages, well it just is not true.  But it makes a great tagline for an article.
[three_fourths boxed=”true” animation=”Fade In From Left” delay=”150″]

Christopher Cart | American Christopher Cart is a painter and print maker focusing mostly on figurative work. A native Mainer his work is also flavored by years in Guadalajara, Mexico and Seattle, Washington.

Cart is currently working on a 14 foot mural to commemorate historic Hallowell of the 1890’s. And also for his home town of Hallowell, in 2012 he completed a commissioned portrait of Allen Strickland, a major donor to the Hubbard Free Library restoration fund.

In 2008 Cart completed a 8 x 32 foot mural for the Brunswick Trinidad Sister City Association. The mural on the wall at 11 Pleasant St in Brunswick, entitled “A Dance of Two Cultures”, is a celebration of the cultural exchange between Brunswick, Maine and Trinidad, Cuba.

Another recent major work is a 40 by 6 foot mural, a composition of color and movement with 22 almost life-sized dance figures showing strength in human form. Throughout his career he has painted other murals, countless watercolors and oils, portraits in both oils and watercolors and illustrations for many books and periodicals.

Christopher Cart studied art and art history at the University of Washington, Seattle and Coker College, South Carolina. After leaving school he began selling his paintings and sculptures at several galleries in the Seattle area. Now he is represented by galleries in his native New England region.

From the late 80’s and into the 90’s Cart illustrated six of the best selling Frugal Gourmet cookbooks and since that time he has created art for many other books and hundreds of illustrations for publications. Most recently his work has been published as book covers for many classics of American literature, including Lydia Bailey and Northwest Passage. 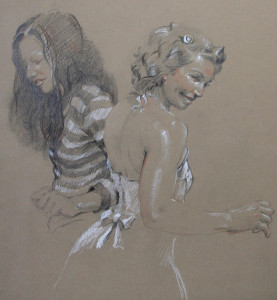 And he is working on a fully illustrated edition of one of his personal favorites, Moby Dick by Melville. In 2005 Cart was invited to contribute a portrait for the Portraits of Conscience exhibit sponsored by Amnesty International and the Lincoln Street Center. This portrait was also part of a traveling exhibit. Cart received the official commission for the portrait of Maine Chief Justice Daniel Wathen which was unveiled at a ceremony in the Superior Court in the State Capital in the spring of 2001.

Two paintings, a watercolor and an oil, were included in the Contemporary Realism Exhibit at the Centre for the Living Arts in Mobile, Alabama. The Venezuelan Consulate on 5th Avenue, New York City hosted the Representing Reality exhibit which included three lyrical oil portraits from Cart’s series of young musicians. Christopher Cart’s watercolor, “Sunday Walk” was featured in “The Art of Maine in Winter,” by art critics Carl Little and Arnold Skolnik, a book featuring many of Maine’s artists both old and contemporary. [/three_fourths]