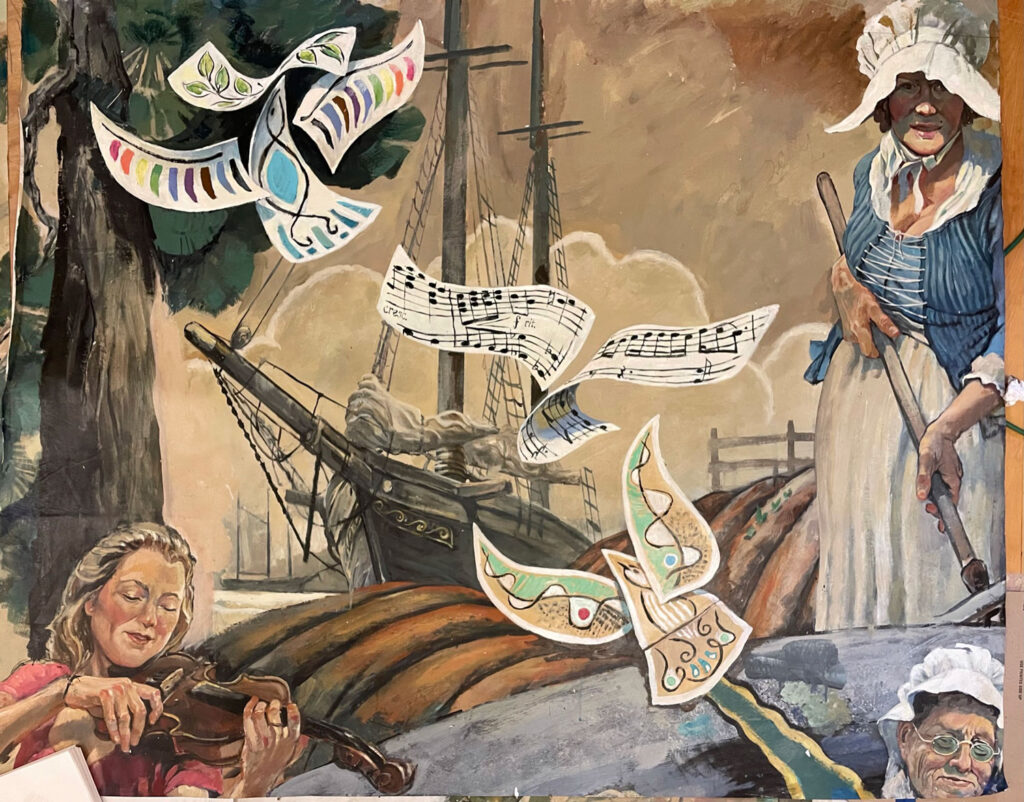 Some areas and figures in the Hallowell mural went in solidly after long and careful planning. However, the birds near the top of the mural started as an abstract concept in my head–I wanted birds but somehow abstracted birds, perhaps out of folded paper, flying in front of a realistic scene. I did sketch in […] 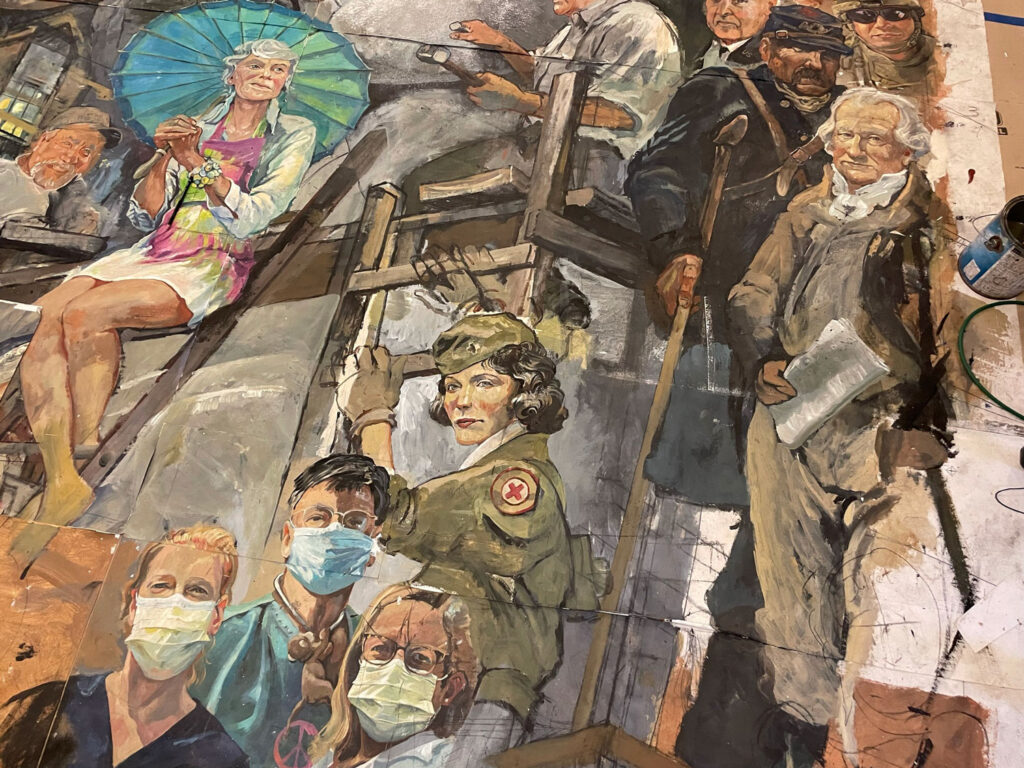 Here I have local Hallowellians of various periods of time standing, sitting and climbing the scaffolding that was erected around the 36 foot granite “Faith” sculpture that was carved here in Hallowell in the 1880’s. 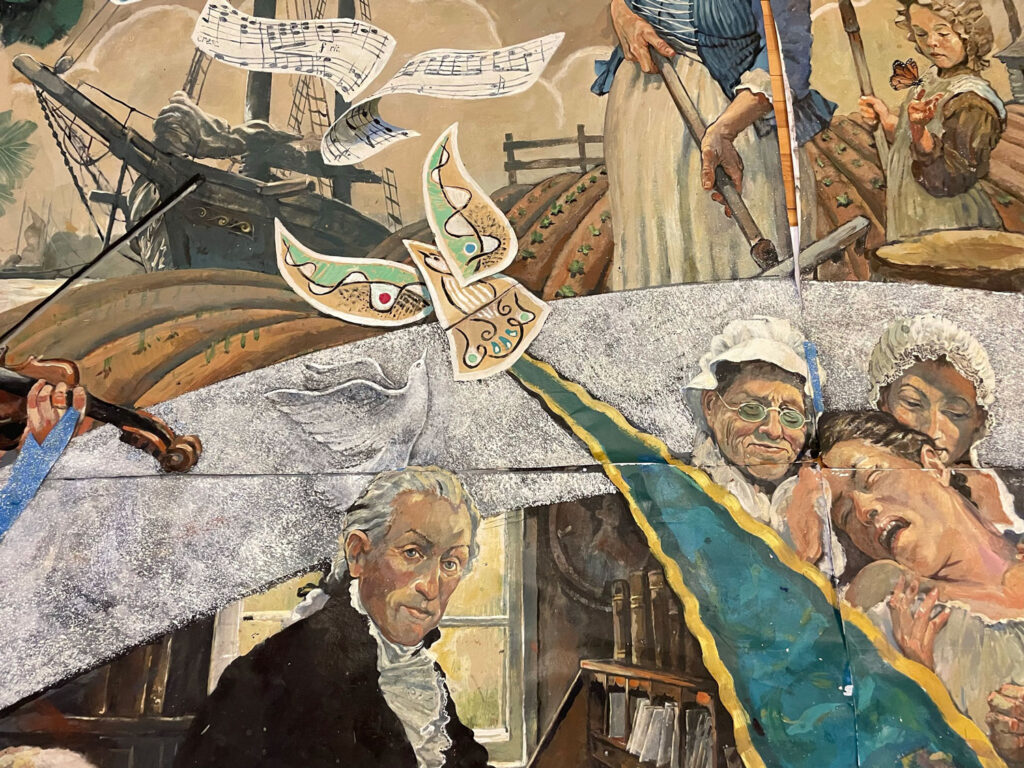 This is a section near the top of the mural. I have been going over various parts to pull up details and add finishing touches. This is Benjamin Vaughan and on the right is a small section of the scene depicting the midwife Martha Ballard delivering a baby. 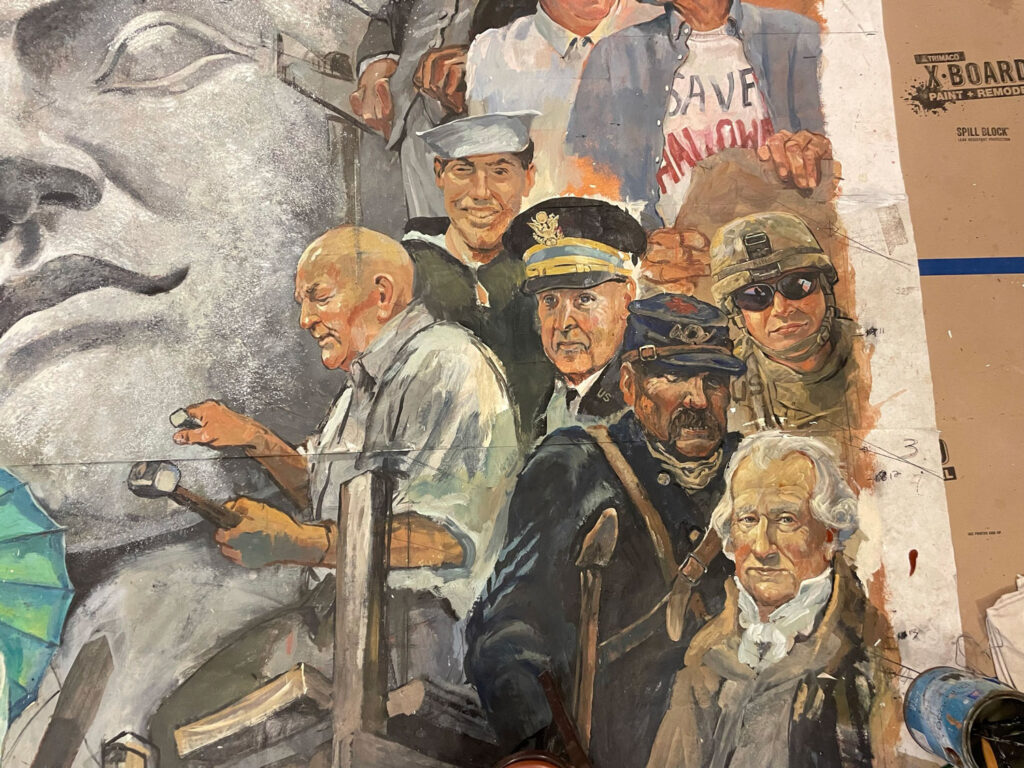 Here I include a representation of some of the many generations of men and women who have served our country in the many wars. This is some of the men…and I have important woman elsewhere, in a section still being painted. 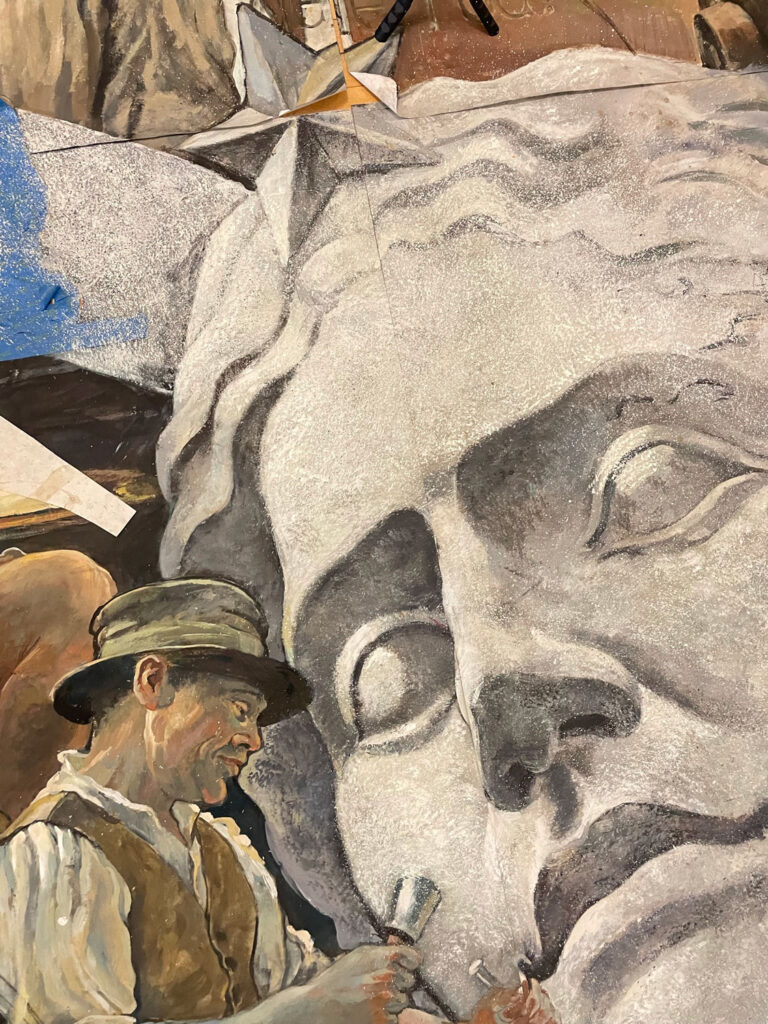 This is the large “Faith” sculpture that was carved in Hallowell in the late 1880’s. She is 36 feet tall, carved from local granite and she is the largest granite sculpture in the United States. She is the centerpiece figure of the National Monument to the Forefathers, in Plymouth Massachusetts. (https://en.wikipedia.org/wiki/National_Monument_to_the_Forefathers) Here I was adding […] 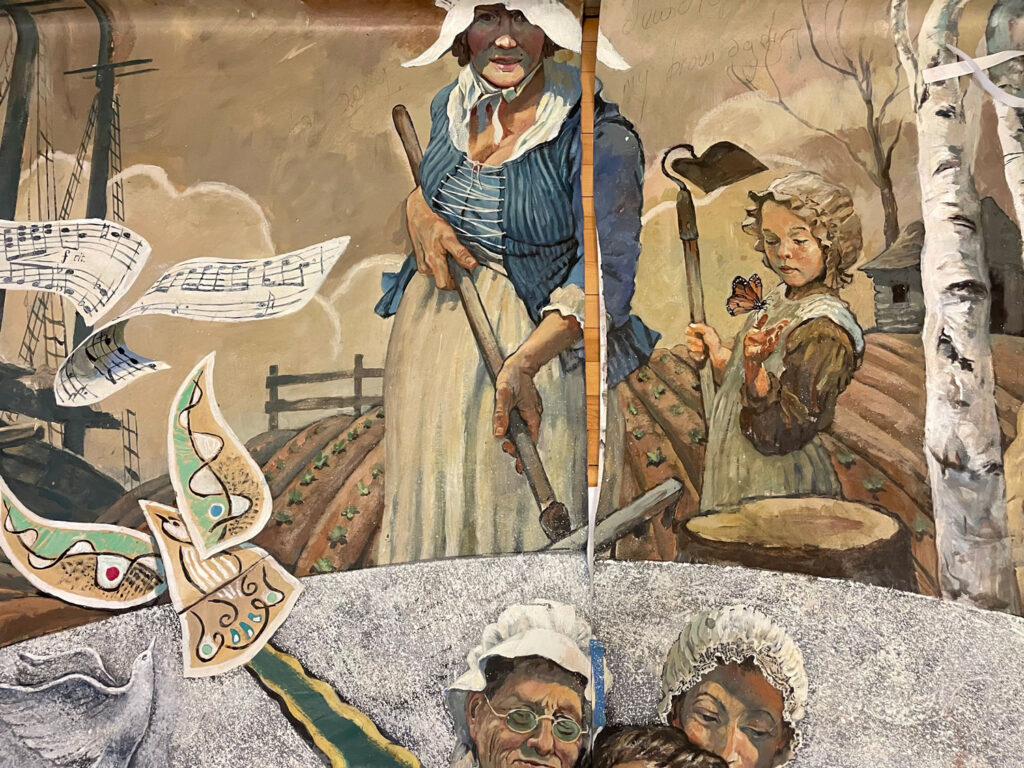 This is a section at the top center of the 24 x 29 foot mural, depicting a colonial period woman tending the fields with her daughter. Hallowell was a major international shipping port on the Kennebec River, so at any given time a good half of all the boys and men in the town were […] 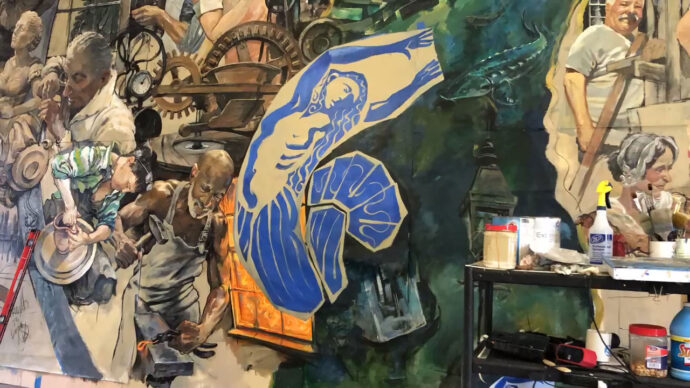 I needed to repaint the mermaid in the Hallowell Mural. So here is a video of the redo. The mermaid is in the mural to reference our very own Slate’s restaurant which burned a number of years ago. And the Slates mermaid rose from the ashes like the proverbial phoenix. 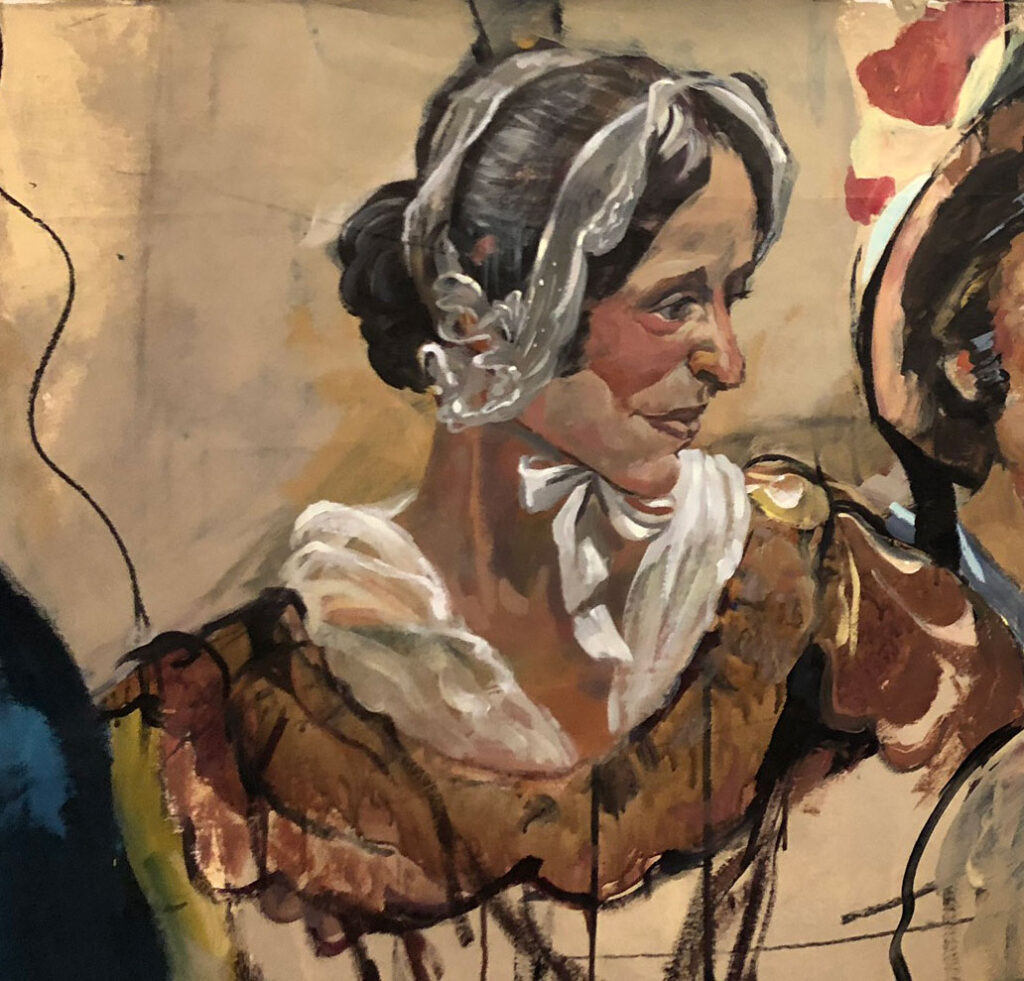 This is Hannah Dole. I am including her in the Hallowell Mural. So, what does it take to include a figure in a history mural? Fortunately, Kate Trembly had an old portrait of Hannah Dole for me to work from, for likeness. However, my job is not just copying an old portrait onto the mural. […] 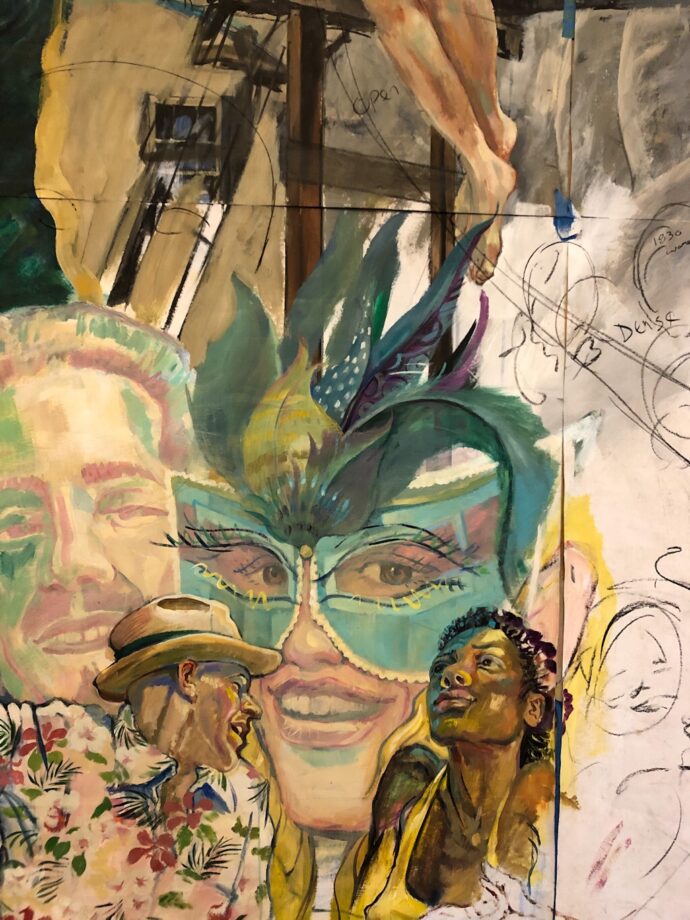 How can you represent our fine Hallowell without showing music, dance and the arts? I have just begun the arts section and this is part of the larger than life figures that will form the backdrop for the musicians and dancers. NOTE: 11/14/21, this section of the Hallowell mural is now completely repainted. So goes […] 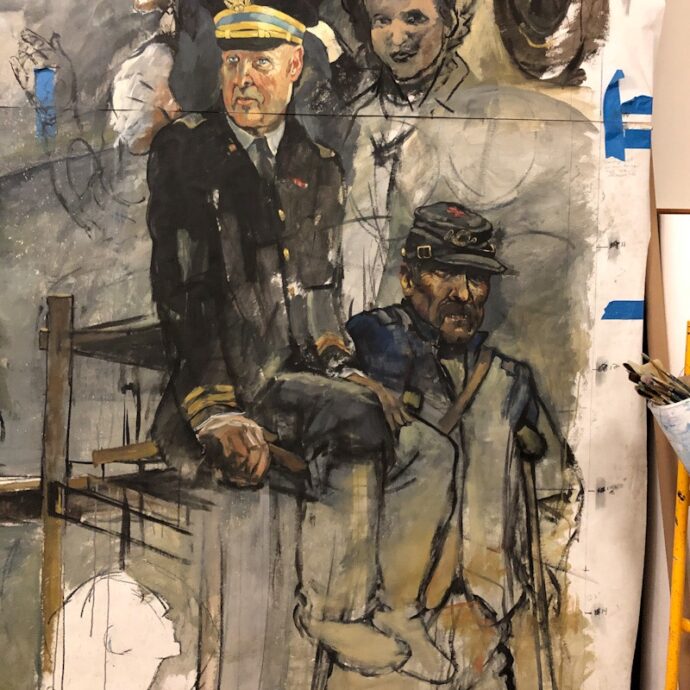 Started adding in a few people from our military representing those from our town who served. 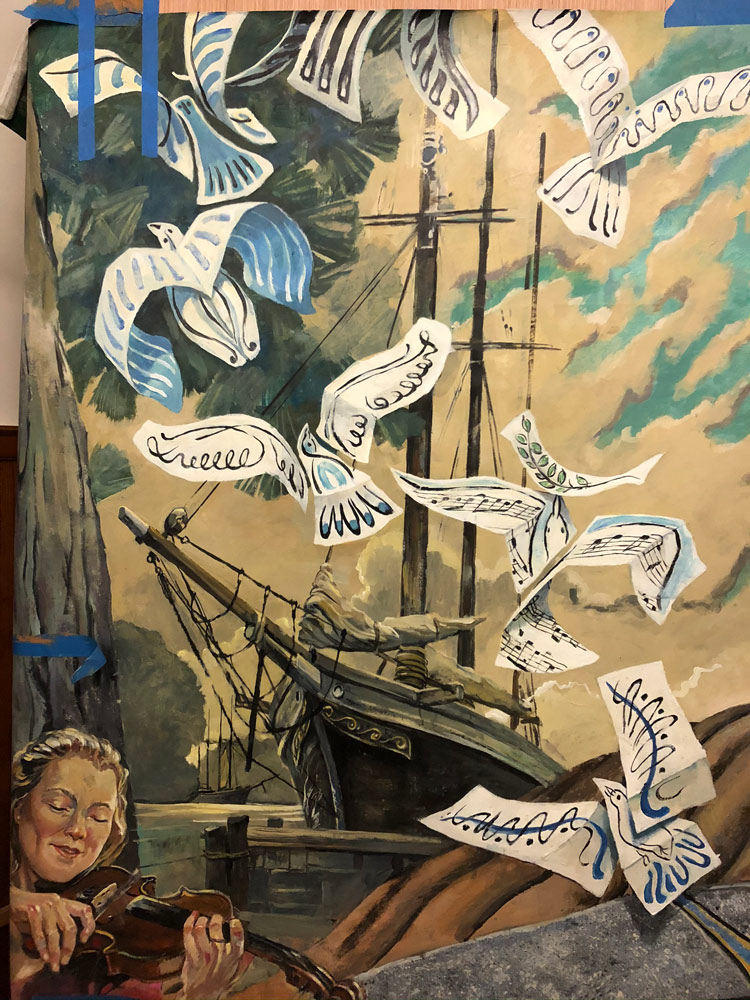 The last couple of weeks for the Hallowell Mural I’ve been refining some of the details of parts that had been blocked in. 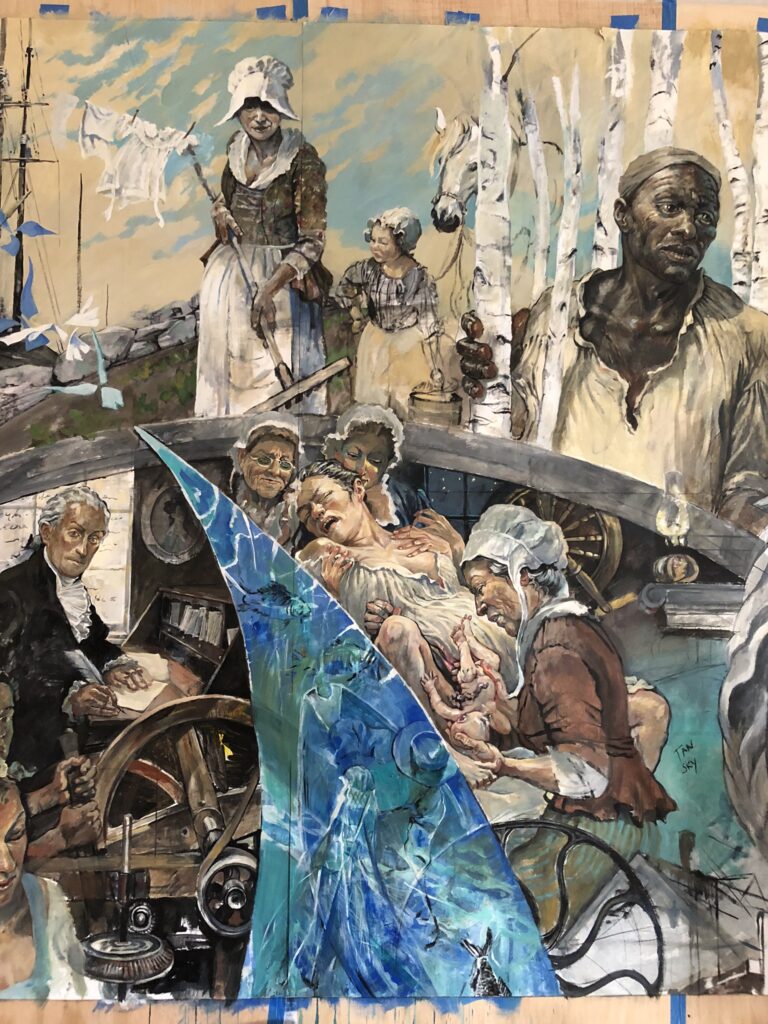 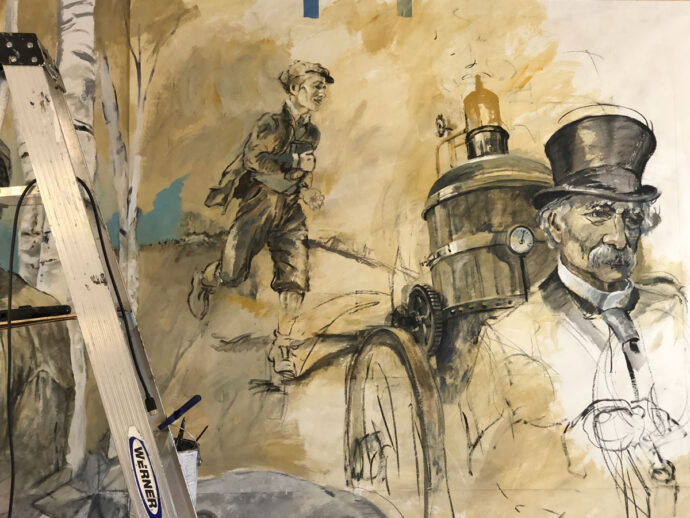 Here are some more progress photos of other parts of the mural. This older gentleman is Judge Richard Rice. In the 1850’s he and some other ingenious folks built the first steam powered car in Maine–built right here in Hallowell. Here I show Judge Rice on his triumphant trip across town on the first car. […]

Martha Ballard was a midwife and caregiver for most of the residents of Hallowell in the late 18th and early 19th centuries. She delivered close to 1000 babies, in a region with a population of only several thousand. She was supremely important to the origins of our town. She kept a diary of her doctoring. […]

Another day at the wall 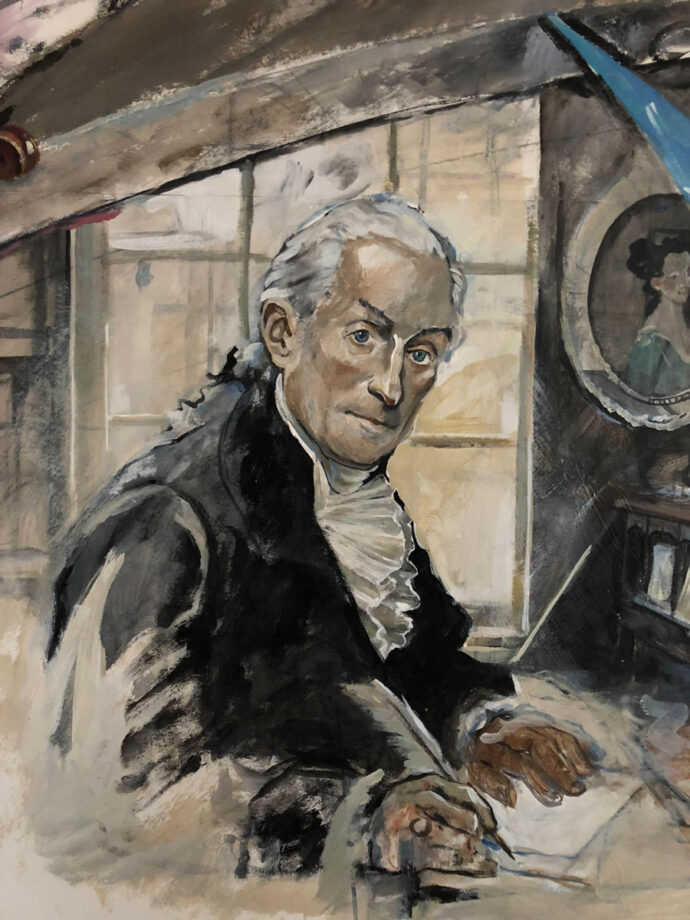 Spent the day refining some of the figures and roughing in a few more. This is Dr. Benjamin Vaughan, a notable patriot, a well read man with a library only rivaled by that of Harvard of the time. Here he is penning a letter to President Thomas Jefferson, one of the many important people with […] 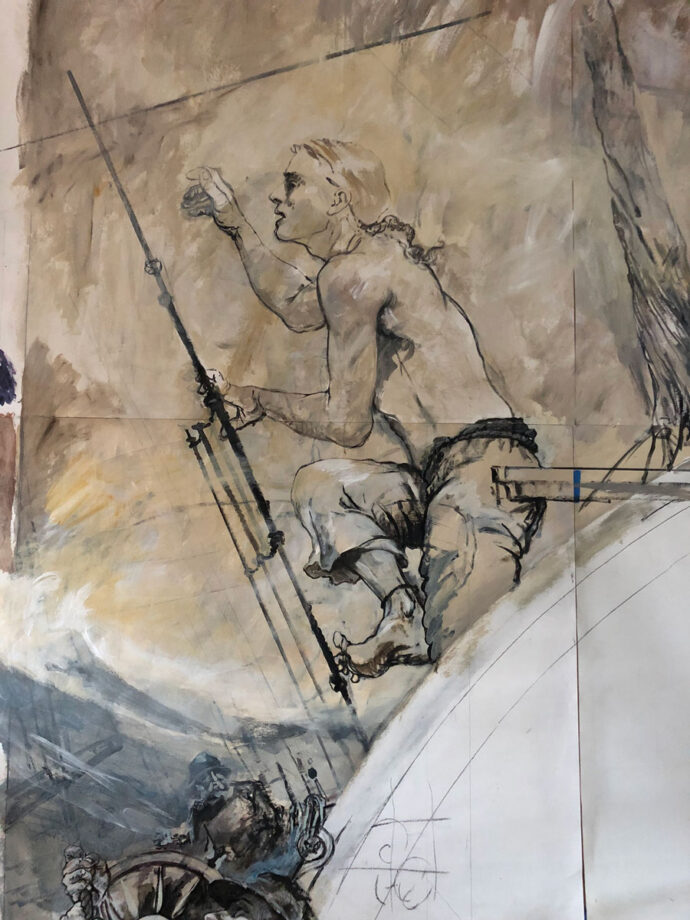 Hallowell was a major seaport back in the days of sail. Ships and seamen from Hallowell were known in the ports of the world. The upper left of the mural is devoted to the seamen of the area. Here I am developing a man climbing the ratlines. 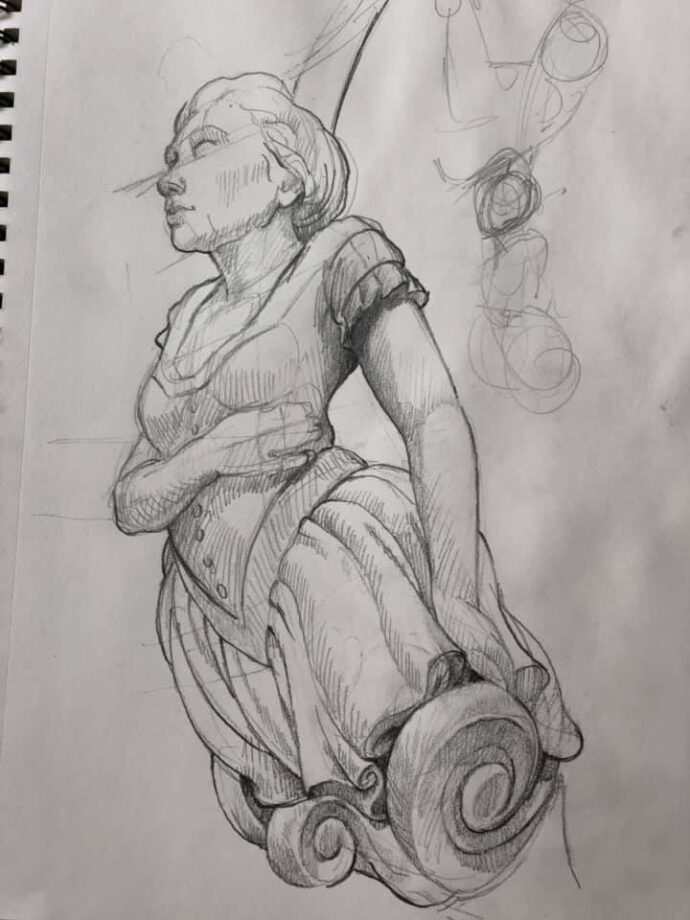 a Hallowell Mural pencil study from this morning for the figurehead I will be working on today. Captain Drew was a well known sea captain from our bend in the river. As with many men from our town Captain Drew sailed to all ports of the world. As well as a sea town, Hallowell was […] 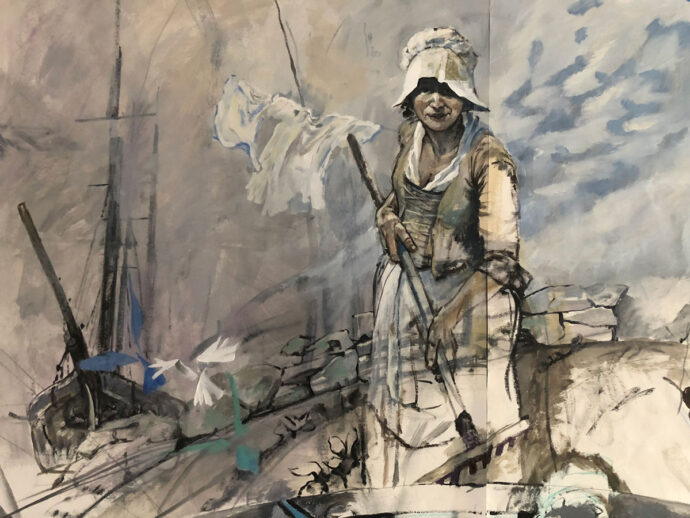 Work is progressing well on the Hallowell Mural Project. Had several visitors on yesterday’s open mural studio Thursday. Here are some photos of progress. Some initial block-ins of figures. I am working on the top of the mural—adding in some key historical figures. You will see these scenes come into focus over the next days. […] 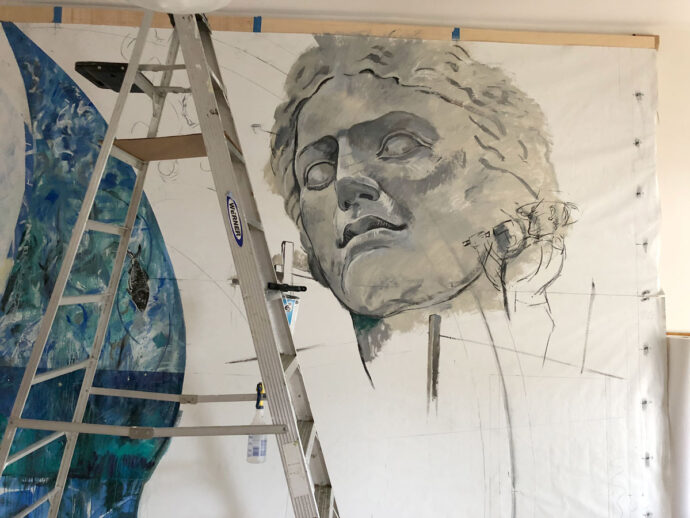 Here are a few details of various parts of the Hallowell Mural. I’ve been working on the upper third of the 28 foot (vertical) mural. The upper left will deal with Hallowell’s maritime history—shipping, ship building. And on the upper right I’ve been blocking in the 6 foot head of the statue for National Monument […] 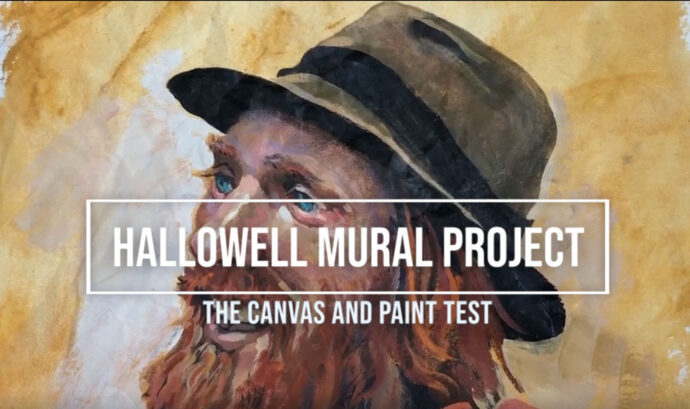 This is a color study of one of the figures who might go in the mural, but more importantly, he is my paint and canvas test to see how the materials will hold up on the wall. The method I am using for this mural was developed by the Philadelphia Mural Arts program, for their, […]