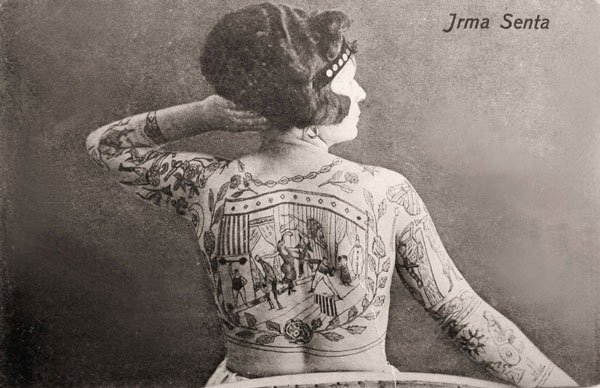 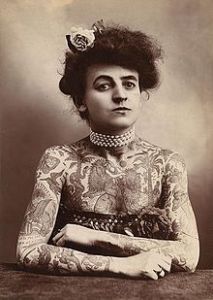 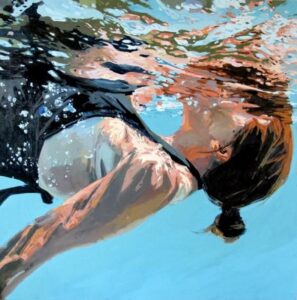 Some subjects make beautiful photographs but merely translating this into a painting does not give the painting reason for being.  While photography, film and painting all share the realm of the visual arts, each has its own reason.    Still photography has a power when it grabs an instant of REAL, a fleeting moment that captures something universal.  A scene of a person underwater is fascinating in a real visual sense in a real photographic sense…but does a painting of this add anything? not really.

Film introduces the dimension of time giving the media a power that is initially daunting, to painting artists, when compared with a still painting.  Film has a built-in power of time and also the strength of it being a medium of light.

The argument surfaces periodically that painting is dead…first maimed by photography and given the death cut by film.  However, this misses the point of paint.

Paint has a power all its own.  When we render something in paint each brushstroke is a personal mark.  If a piece is created from hundreds, even thousands of pigmented marks a very personal statement is being made about a subject.  The challenge as an artist is not to create a personal mark or signature stroke…but rather to create stroke that is good, build on another stroke that is good until a piece is complete.

A paintings is sum or quotient of all the things included, things left out and the manner they were brought to life.   A great painting has an unmatched ability to live on a wall and breath with life every day.  Film moving on a wall constantly would be initially fascinating and then soon annoying.  Still photography can be eternal for walls but it is perhaps more difficult because a photograph is inherently mechanical…it takes a true artist to push through or beyond the  mechanics of good photography to make something grand and personal.

Painting on the other hand is inherently personal.  The challenge is not to compete with photography or film, or to try to somehow piggy back on the other two mediums, but rather to find paints core power and use it to create something good.